Forest Grunigen was born in Sequoia National Park, California on July 31, 1905. He graduated from Woodlake Union High School in Woodlake, California in 1924 and diligently worked at a variety of weekend jobs to pay for his college education, including driving delivery trucks and roughnecking for Shell Oil Company. He graduated from the California College of Osteopathic Physicians and Surgeons in 1931 with a Doctor of Osteopathic Medicine degree, obtaining his internship and residency training at the Los Angeles County Osteopathic Hospital. Early in his career he served as a physician to the MGM stars of Hollywood's golden era in the 1930s and then received further urology training in Nazi-occupied Austria as World War II approached. Returning to the United States two years later, he completed his urology specialty training at the University of Michigan Medical School. In 1962 he received his Doctor of Medicine degree from the California College of Medicine and served as honorary clinical professor at the University of California, Irvine until 1984. Following his retirement, he continued to serve the medical profession and the State of California with numerous appointments, including serving as President of the California State Board of Medical Examiners.

Dr. Grunigen was instrumental in the unification of the California Medical Association (CMA), and the California Osteopathic Association (CAO) and the successful state ballot initiative (Proposition 22) that made the merger of M.D.s and O.D.s official in 1962. He was also a leading voice in bringing the California College of Medicine into the University of California System, and then to its present home at the University of California, Irvine, in 1967. Dr. Grunigen was deeply committed to the education and training of physicians throughout his life and helped ensure the survival and success of what is now UC Irvine's School of Medicine.

Dr. and Mrs. Grunigen's dedication to the success of the UC Irvine School of Medicine was further strengthened through the establishment of a charitable remainder annuity trust to benefit the Forest J. Grunigen, M.D. Library Fund. In 2001 the UC Irvine Medical Center Library was renamed the Forest J. Grunigen Medical Library in honor of Dr. Grunigen's work as a School of Medicine alumnus, supporter and friend. The Grunigen Medical Library, a cornerstone of medical teaching and learning, has become part of the enduring legacy of Dr. Grunigen, who passed away in 1999 and serves as a reminder of his accomplishments and the leadership that influenced many generations of medical alumni.

His biography, A Strength Born of Giants: The Life & Times of Dr. Forest Grunigen by Dolores Grunigen and Jay O'Connell, chronicles nearly a century of adventures and accomplishments, as well as, his role in the history of UC Irvine's School of Medicine. It is available for loan from each of the Libraries, please see the Library Search record for the book's availability. 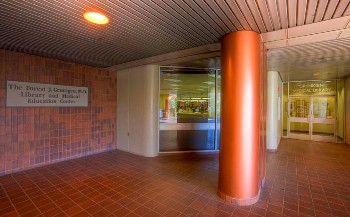 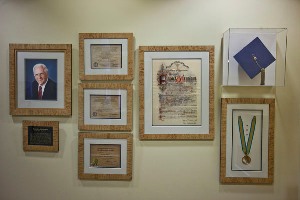